This weekend we decided to go somewhere that we could climb up to at least 2,000 m altitude and explore one of the dozen Andermatt hiking trails

On the amazing website called Wanderland which offers hundreds of hiking routes in Switzerland, we picked the one numbered 51.

Actually, route 51 starts in Oberwald and ends in Andermatt after 35km, but we decided to start from the other side and as we had just one afternoon to hike, we wanted to reach the lake called Lutersee which is at 2,000 m elevation.

So here we go.

I had never been to Andermatt before and all I heard about it is that it is a pretty cool skiing resort, maybe one of the top skiing resorts after Zermatt and Saint Moritz.

In case you’re visiting Zermatt too, be sure to find out awesome things to do while staying there.

The town itself is full of many big hotels and other touristic stuff, but the population of Andermatt is just over 1300 people. So it’s not crowded, actually, as the weather was pretty bad: very windy and wet, it was almost completely empty. Just by the train station, we saw quite a lot of tourists who were taking the amazing glacier express which takes you to Zermatt by train and offers maybe the best views you could actually see from the train in Europe.

How to Get to Andermatt

If you are going to Andermatt with a car, it is very easily reachable, you will have to go up some serpentines on the last stretch to Andermatt, but all other road is going to be a highway.

One bad thing about the road to Andermatt is, that they turn to the city itself, is very close to Gotthard Tunnel and it is the tunnel which gets you to Italy and it gets jammed almost every weekend and the traffic jams can be as long as 10 kilometers and waiting time is very long. If you’re looking for an alternative route and would love to drive one of the best roads in Europe, then pass Gotthard Tunnel and enjoy views from Gotthard pass.

So on the way to Andermatt, we experienced a huge traffic jam on the highway next to the mentioned Gotthard Tunnel… It really sucks to get in a traffic jam on the highway, because that’s the least what you expect to happen. So we spend around 1h30min in a car going like 5 km an hour and sometimes even stopping for 10 minutes or so. But just right after we got to our turn to Andermatt, the road was empty and quite nice as well as we were going up the mountain roads.

I would suggest parking right next to Andermatt train station, it’s not that expensive and very easily you can reach the mountains from there.

As well, you can reach Andermatt by train from any big destination. Just be aware to check all the latest timetables and prices here. It is very well connected and even has some very famous trains like Glacier Express or from Andermatt train station you can go up to Oberalp Pass.

There are even more hiking options over there.

Andermatt Hiking Trails – Which One to Choose?

Andermatt offers dozens if not hundreds of different options for hikers. There are plenty of routes that cross Andermatt and after Andermatt divides into many other routes and trails. It’s a paradise for the hiker. Mountains and rocks are just next doors. You walk like 1-2km from the city center and you are already going up.

So as I said, we chose route 51 which was pretty easy to find by the train station.

The route leads straight to a big meadow by Andermatt where they have a huge golf court. Really nice done. Really. Maybe Trump owns it? I don’t think so.

I wonder how long does it work every year as at the end of May there were no people and the weather was still pretty rough.

On the route, we met just two people who were resting by the route at 1,500 m altitude and no one else afterward.

The trail and all the paths are pretty well maintained, but I do not suggest to go there when it’s raining, it would be very slippery. I think it rained the day before and it was still quite slippery in some parts of the way up.

Until you reach the altitude of 1900m the hike is not that majestic and nice as you see two towns below you and the road which makes a lot of noise. It’s not a big road, but still, you can hear every car. But right after you go further up you hear no cars and you see no towns, just beautiful rocks, mountain grass, some moss, and spots of snow.

At the altitude of 2060 m, we saw a post that shows directions, but it was on the ground so I believe that weather conditions there in wintertime are pretty rough.

As we started to experience more and more snow, we changed our shoes which stands the snow much better.

And, I suppose, at an altitude of 2,100 m all the paths were quite impossible to be seen. It was all covered in quite deep snow and if you are not with good shoes, I would not suggest going further anymore. It can get pretty dangerous and very very slippery. As well, as summer is kicking in now, the snow is melting and moving all the time, so it’s not a safe surface to walk on.

I don’t know if we missed any signs or something, but we were not able to see the lake which was a pity. I came just to two conclusions: it was covered by snow (and it’s not as big as you expect) or we lost our way somewhere, as the post which shows direction was fallen on the ground, so maybe some were missing.

Doesn’t really matter, the weather was harsh, wet and cold, even snowing a little bit, cloudy, but the views were nice. There’s a beauty in nature’s chaos. You don’t really all the time need to experience just nice sunny weather… clouds and rain are good as well.

Next time I would maybe choose another route which would go straight to the valleys and no civilization is seen and no cars noises. Andermatt offers a lot of routes, so just check the one you like and get lost in the Alps (in a good way).

The hike up to the peak of our day took us 1h50min, it was 7km and the ascent of 909 m. Pretty good, almost 1km. The hike back was a little hard in the beginning as the snow was really slippery, but once we reached the dry ground it was a piece of cake. All in all, 14km, 3h29min.

I hope you like the photos as it was very cloudy. 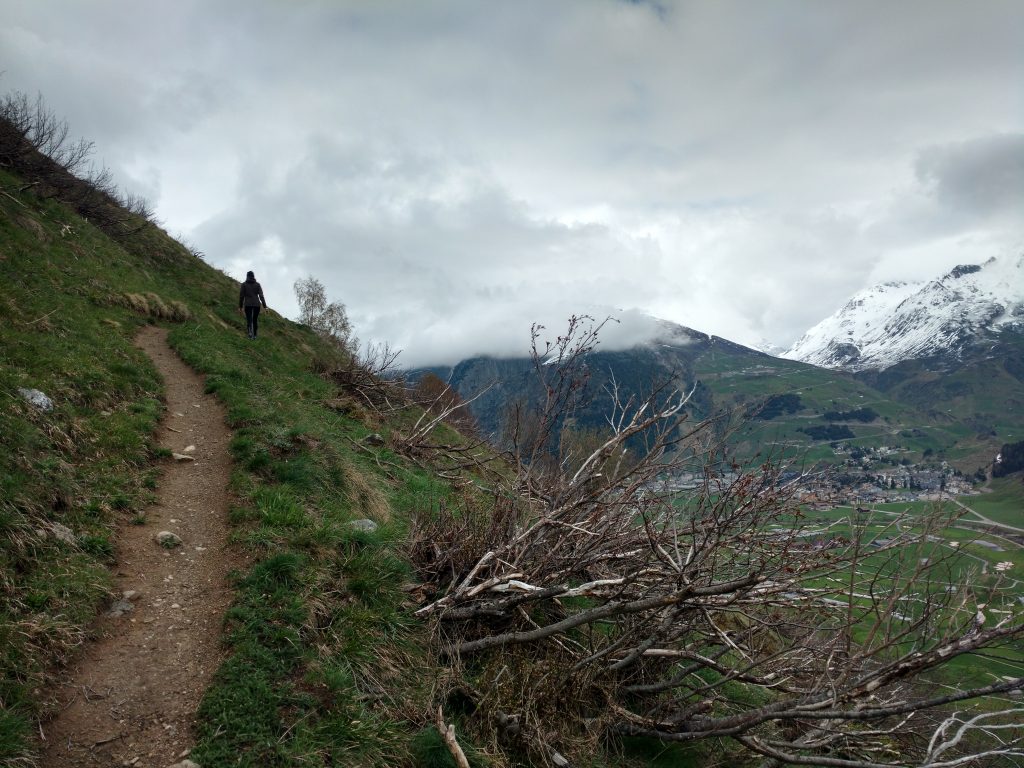 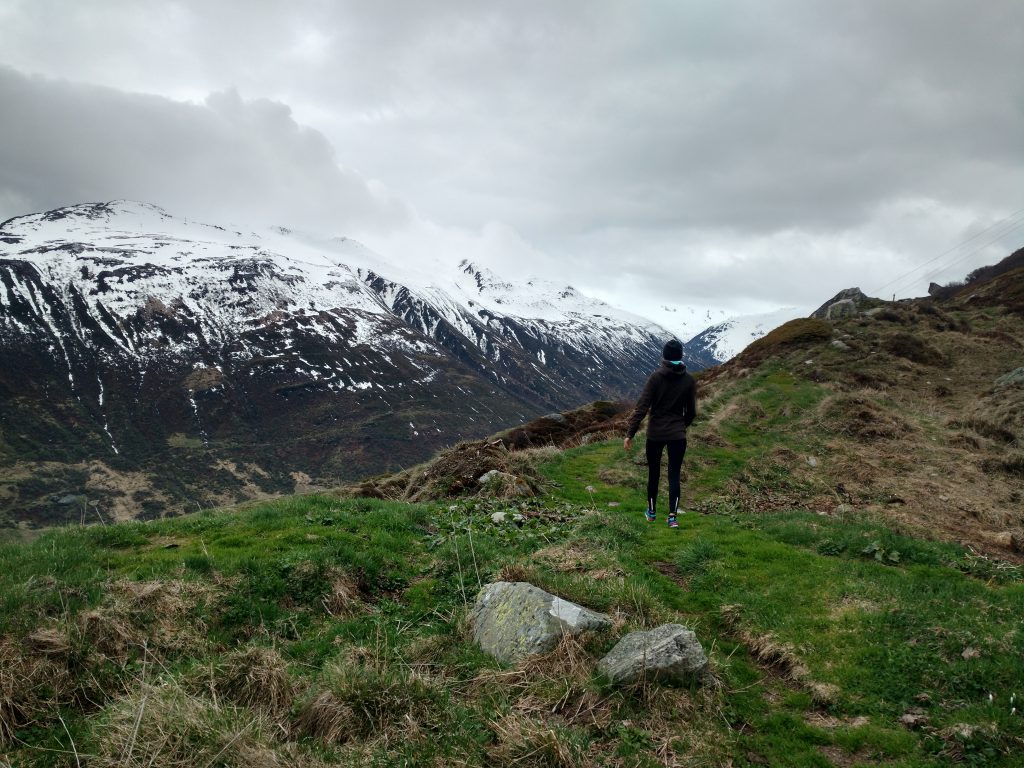 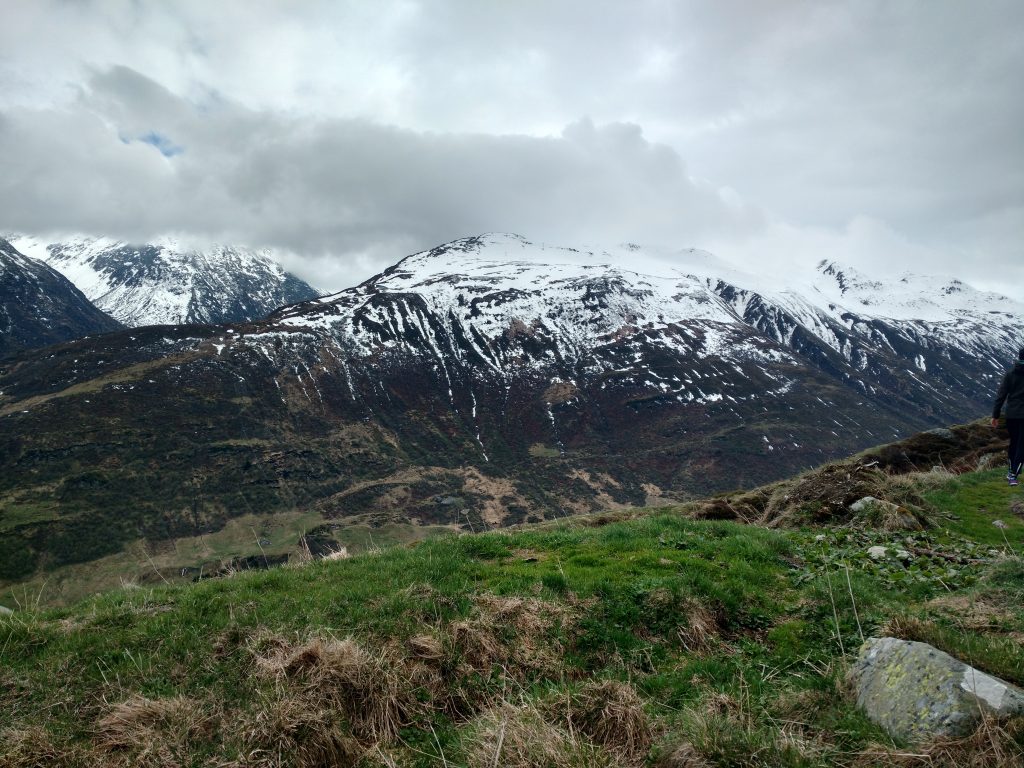 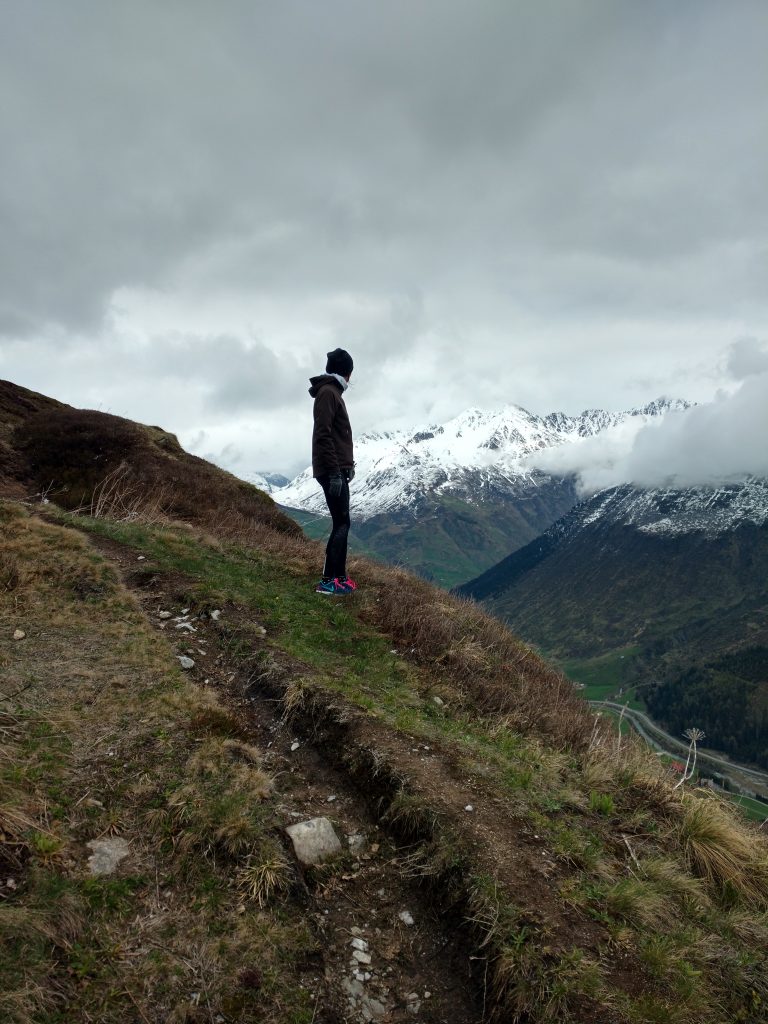 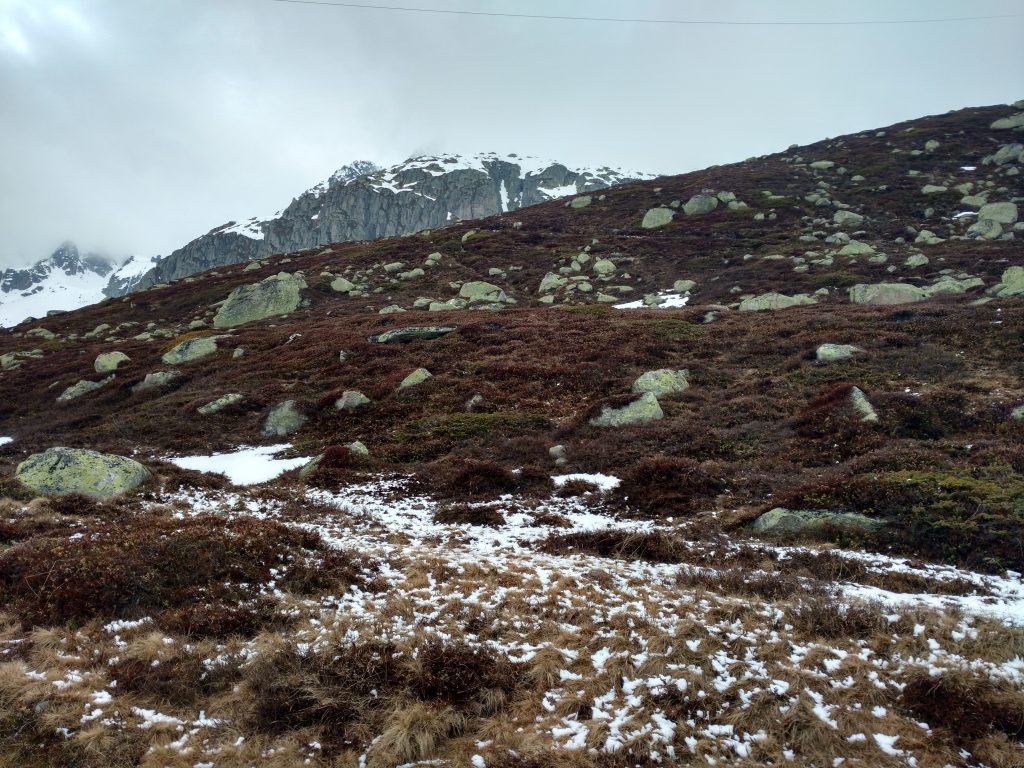 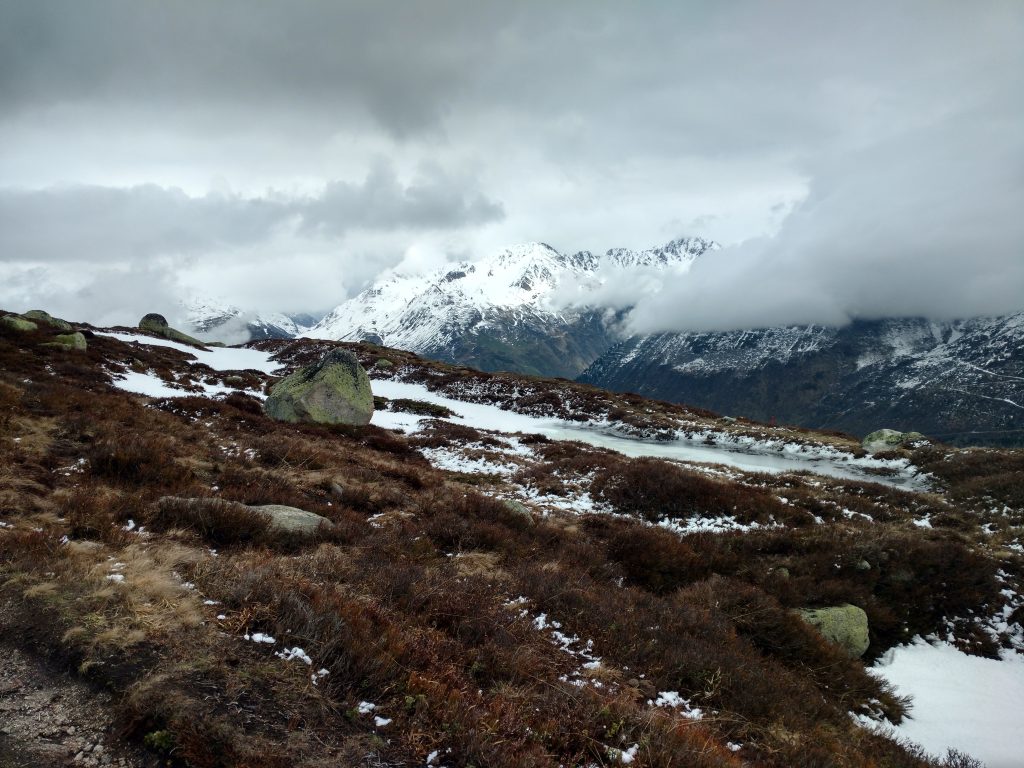 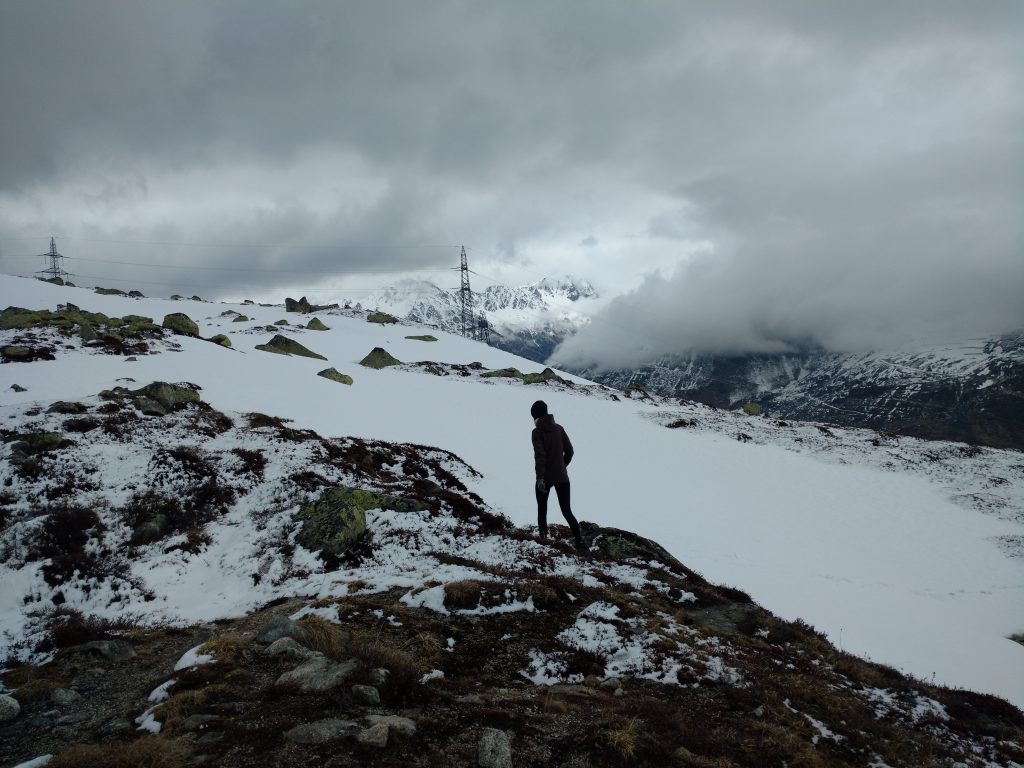 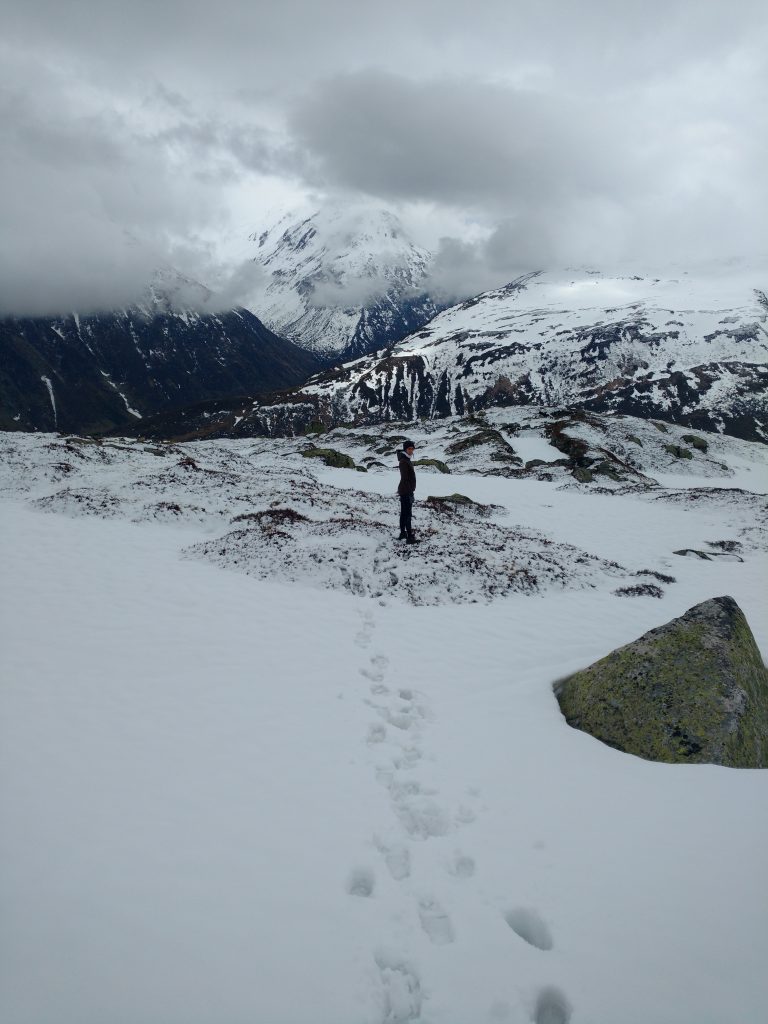 Where to get inspiration for hiking?
10 most exciting things to do in Bellwald, Switzerland