Camino de Santiago became a very popular pilgrimage, especially after the premiere of The Way. After a bit of researching, I’ve decided to pick a Camino and do my walk. If you’re asking yourself which Camino to choose, then you’re in the right place.

I did Camino de Santiago first in 2009, I started at the end of January and finished in early March. As well, after reaching Santiago de Compostela we hiked to Finisterre and as I had few more days before my flight back home, I walked to Muxia and back to Santiago de Compostela, so my all trip took 38 days and I made around 1100km.

I did some research before my trip to Spain and all I really found was that there’s just one Camino and it is Camino Francés which starts in Saint Jean Pied de Port and goes all the way to Santiago de Compostela. Just after walking for a few days, I found out that there are other Caminos coming from north or south of Spain. As well I met some people who walked straight from their home (this is actually the most hardcore thing to do as in medieval ages pilgrims started their trip to Santiago de Compostela right from their home town).

So after walking for the first 5 days (we made maybe 100km on the first 5 days) I met a guy who was walking from Leipzig, Germany… I was so impressed because by that time he had walked approximately 2000km.

Which Camino to Choose – Find the Best Trail for You

When we came to Santiago de Compostela (where all the Caminos join together) I met people walking from Portugal, Valencia, even Rome or Bilbao. So there are quite a lot of options.

I myself did Camino Francés two times from Saint Jean Pied de Port (France), two times Camino Portugues from Porto (Portugal, but to make the full Camino you have to start in Lisbon) and walked for three days in Camino del Norte. If you’re wondering where is the starting point, I have an article about it.

So if you’re asking yourself which Camino to choose, here is the list of most popular Caminos: 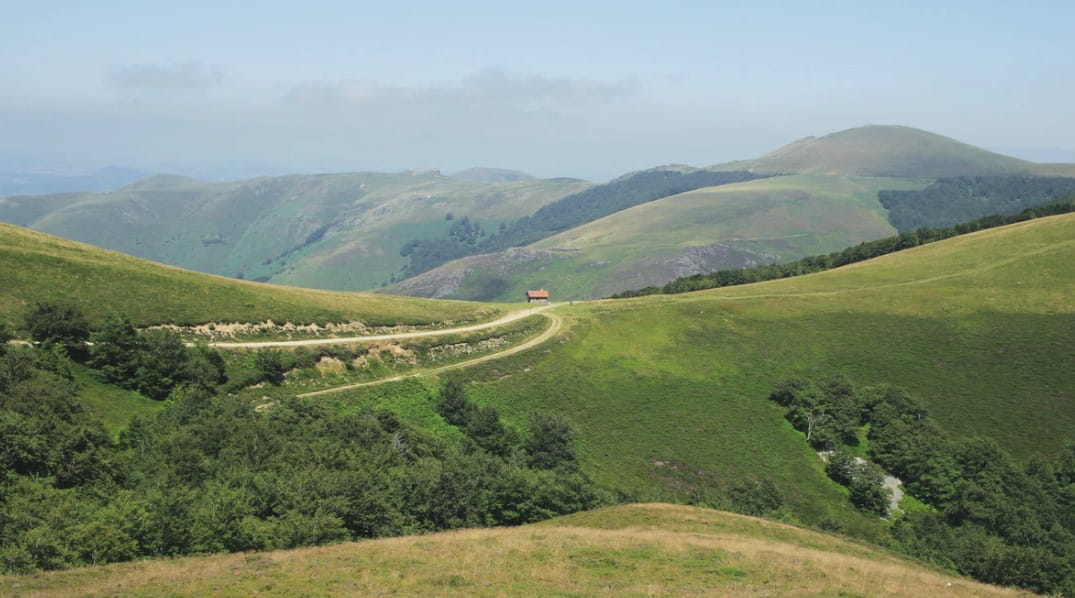 Camino Francés is the most popular route to walk and the most crowded as well. If you walk there in the summertime, it’s full of people all the time. I walked it both times in winter/spring, so it wasn’t that crowded, and a few times I was the only person sleeping in Albergue.

If you are going to walk Camino for the first time, that is definitely the best option as this route has plenty of albergues (hotels, pensions, private rooms as well), it is very well organized, you will meet much more people, there are plenty of restaurants on the way which offers special pilgrims lunches and so on. There are sometimes albergues each 3-5 kilometers so you will always find a place to sleep.

If you get tired, there are bars, restaurants in almost every tiny town or village, so there’s plenty of opportunities to rest in the middle of the day.

I did Camino Portugues both times from Porto as I had a very limited time frame.

Camino Portugues is definitely less crowded and albergues are not so frequent, but there’s no problem with it. Sometimes there are just longer distances between them, but at the same time, they’re very few people sleeping there. A couple of times we slept in huge albergues just two of us.

Camino Portugues is quite full of bars and restaurants, so there’s no problem with getting coffee or lunch.

Portugal is as beautiful as Spain, but at the same time, it’s much cheaper. Coffee, food, or anything else is cheaper. So you may enjoy restaurants more often there.

I can’t talk about all the Camino del Norte as I walked just for three days there, but it’s definitely different from Camino Francés and Camino Portugues.

First, it’s much more hilly. You will be walking in mountains quite a lot, so it’s much harder to walk than other Caminos.

Secondly, it has a lot of off-road paths and trails which in bad weather get very uncomfortable to walk. I walked once in a huge wet meadow which was going up the mountain slope and it was very slippery.

Thirdly, weather conditions there change all the time. It’s like London in winter. It can start and stop to rain 10-20 times a day. And as you are walking pretty close to the ocean, the wind gets very strong as well. Few times we had to get off the path as there were many fallen trees. It was impassable.

And the last one, there are very few restaurants or other places to relax. The same goes for albergues. There are much fewer than on Camino Francés. Much much less. And I would say that the quality of albergues is as well much worse. Once we walked 44km, came in all wet, it was like +5 degrees outside and they had no heating at all. Zero. It was damn cold inside. As I knew that in such a temperature our shoes and clothes won’t get dry after the night, we decided to rent a private room better which was maybe 30 euros and it was a good decision.

BUT. As Camino del Norte offers much harder weather and walking conditions, it offers much more spectacular views. You will be able to enjoy the ocean, valleys, and mountain views quite often. So it’s not all that bad. You just have to prepare yourself.

Camino Finisterre is usually for people who hadn’t had enough after doing hundreds of kilometers to reach Santiago de Compostela.

I did Camino Finisterre two times. It’s not long, 90-100km and most people do it in three days. There are maybe 3-5 albergues on the way to Finisterre. You may ask how many kilometers per day you can do? Well, it really depends on your physical endurance, weather, and accommodation options.

Camino Finisterre starts in Santiago de Compostela and finishes in Finisterre which was once believed to be the end of the world.

Camino Finisterre is pretty easy, there are some steeper hills, but overall it’s a mild hike. Most of the time will be in nature which is very nice as walking through industrial sites is very exhausting.

After reaching Cee on your third day, you will be able to enjoy beautiful ocean views till your final destination at Finisterre.

Finisterre is a little fishing town which is very popular for its lighthouse right on the cliffs at the end of the world. This is the place where some pilgrims burn their shoes or clothes they used to conquer Camino de Santiago.

So if you have 3 additional days after finishing Camino Francais, I highly recommend doing Camino Finisterre as well.

As after Camino Finisterre I had even more time before my flight back home I decided to walk to Muxia as well.

I heard about it just when I was walking back on my first day from Finisterre to Santiago de Compostela. In Albergue of Corcubion, the host told me that there’s a nice path to Muxia which is a cozy city right on the ocean shore.

I walked back to Olveira (which is on the way to Finisterre) and the day after walked to Muxia. Muxia is not full of pilgrims at all, but at that time it had the biggest Albergue I have ever seen in Spain. It was really really big and there were just two pilgrims sleeping that night.

I would like to say that after finishing Camino de Santiago (you must walk at least 100km) in the Santiago de Compostela pilgrims office you can get a diploma which confirms that you made such a Camino. Interestingly enough, you can get your 2nd diploma in Finisterre which confirms that you did that one as well. And in Muxia I got the third one. So I came back home with three diplomas.

As I told you before, there are other Caminos as well, but as I haven’t walked them, I do not have very much to say, just what I heard.

Camino Via De La Plata and Camino Primitivo lack albergues, restaurants, and bars as well as Camino del Norte. One person told me that he had to walk 55 km to find the next Albergue on Camino Via De La Plata which is not that easy to do. But I am pretty sure that these Camino offers nice attractions, beautiful paths, and spectacular views as well. For these Caminos, you should be comfortable to pitch a tent and sleep in the bag below the stars.

If you are doing Camino for the first time, I think Camino Francés is the best option as it is full of albergues, restaurants, people, and bars. It is really nice way to get to know the Camino, it’s good and bad.

But if you are looking for a more challenging route, you are welcome to walk Camino del Norte.