There have been sightings and evidence showing numerous species of leopard cats, grey wolves, and Asiatic black bears among other dangerous creatures. In as much as they are endangered species, you will likely find one in a very long time. Regardless they are essential and the biodiversity created by these creatures is perfect for maintaining the environment in the Middle East. In the last decade, camera traps captured images of bears and other creatures around the country.

There is enough evidence to show that although these creatures are elusive, you can still find them across the country. The most common creature you will find in the country is the Indian crested porcupine, which shows that the red fox, jackal, and grey wolf are also common. Here are the animals and creatures that you should avoid when exploring Afghanistan. The afghan landscape is unique because you will find valleys, mountains, and ranges to very dangerous barren and dry desserts. This means that the diverse climatic conditions can support different animals. Here are some of the dangerous animals you should avoid when visiting Afghanistan.

Although Afghanistan is often considered an arid region and there are not many water pans or water bodies, there are mosquitoes that thrive even in the small water catchment area and any wet places. These mosquitoes are known to lay a huge amount of eggs and hatch into larva and then adult mosquitoes, which bite.

The mosquitoes are carriers of dangerous diseases, viruses, and bacteria, and you should ensure that you should carry a mosquito repellant during your trip. Some side effects of mosquito bites include redness, itching, swelling, numbness, headaches, and fever. If mosquitoes bite you, then you should seek immediate medical help because this can help you prevent other infections. The diseases that the mosquitoes can cause include the zika virus, chikungunya, Nile virus, and malaria.

Perhaps this is one of the most dangerous creatures that you are likely to find in the country and this viper is characterized by a forked tongue and a unique tail. This snake is known to thrive in the drylands of Afghanistan. The saw-tailed viper is characterized by having a dark brown color, ribbing sections along their body and they often produce a hissing sound before biting the victim.

This is a small snake but very dangerous because of the harm that it can cause within a few minutes. The snake can grow up to two feet in length and produce venom that will cause the death of the victim within minutes. The venom from the saw-tailed viper is known to cause blood clots if the antivenom is not administered immediately. The side effects include internal bleeding, muscle function loss, and death. The snake is mostly found in the arid areas of Afghanistan.

They are usually stout with a pear-shaped head and have very distinctive body scales. The diamond pattern on the body helps these snakes to hide and camouflage perfectly on the ground. You must seek immediate medical attention if you have a run-in with the viper.

The venom that the scorpion secretes is very dangerous because it is known to be neurotoxic and will cause excruciating pain to the victim. There has been a situation in which scientists have been making antivenom that will help victims from the adverse effects of the venom. You should always ensure that you avoid dark places and your room should be clean and out of arachnids.

The arachnids are filled with venom that affects the nervous and lymphatic systems. Since the spiders usually like dark places then you must check out the places that you are staying in to ensure that there are no spiders. In some instances, the black widow spider is characterized by an hourglass shape with a black body and fur. They might seem small but these spiders are very dangerous because they can deliver venom that will cause severe side effects to your body.

The side effects that you are likely to experience include redness, swelling, severe pain, tissue damage, and burning sensations. The spiders are found in most parts of the country and they usually prefer dark hidden places and even in the urban areas as well. The toxicity of the venom makes them one of the most dangerous creatures that you can find.

The red ants are found all over Afghanistan and you should be careful when traversing the country because you will encounter them in different parts of the country. These ants are characterized by a dark head and a red-brown body. The red ants are medium-sized when compared to other ants and many people might underestimate them for being docile and less dangerous. However, this is not the case because these fierce insects can sting and bite you and they have very sharp claws that can pass through tissues and cause tissue damage and even organ failure.

They are very aggressive and they usually move in swarms; hence when attacked by one there are much more ready to attack you. If you are allergic, then this will spell doom for you because they carry bacteria and viruses, and can they can as well cause allergic reactions. These ants grow up to 6 millimeters long and they can cause the previous allergic to show especially in people who have been attacked by these ants before. Some of the side effects of the bites from these ants include difficulty breathing, burning sensations, and bleeding. If the ants attack you, then you should seek immediate medical attention. 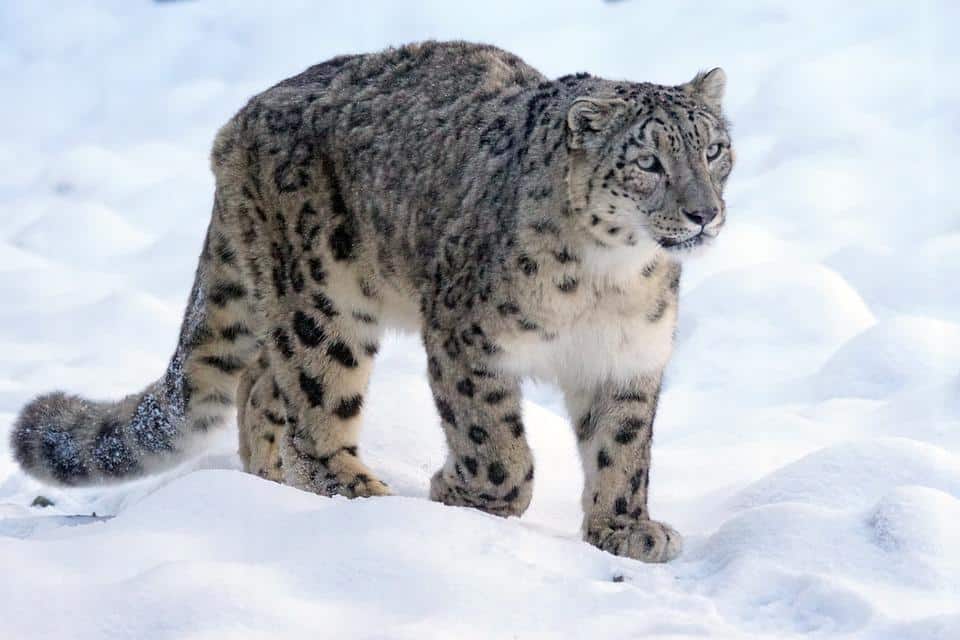 The snow leopards are found in the northern region of Afghanistan in the mountainous range of the country. These creatures are characterized by thick grey fur with a yellow tinge and spots on the lower limbs, back, and forehead. The leopard is among the endangered species and they are very elusive creatures they are under threat from farmers and poachers as well in the region. The number has risen and can pose a great danger to tourists.

The fur of the leopards is whitish and grey because of the snow in the mountains. These cats are usually large and can grow to 60 inches long and 120 pounds in weight. They have very sharp claws and teeth and can be vicious because they usually feel threatened.

The tarantulas are some of the most dangerous creatures that you are likely to find in Afghanistan. These are very scary creatures and if you have arachnophobia, then you are likely to lose it if you see them. They are found across Afghanistan. Essentially, these spiders are not venomous, however, they have very huge fangs that are known to be very dangerous to people because they can bite through tissues.

In a situation where the tarantulas bite you then you should clean the wound properly and avoid places where these creatures thrive. There is a high chance that the infection might spread hence the need to take care. If the bites are big then you should visit a clinic immediately and have them treated.

The Himalayan brown bear is a creature found in northern Afghanistan and parts of Pakistan, Nepal, and China. This is the largest mammal in the region and it can grow up to 7 feet long they are omnivorous and during winter these creatures are hibernating and can be very dangerous.

These brown bears are similar to their counterparts of the snow leopards and are often known to attack farmers’ livestock. These bears are usually elusive, however, they are very dangerous because they can attack you and cause serious injuries and even death. The claws are very sharp and they have teeth as well.

The camel spider is one of the creatures that you are likely to encounter in afghan land and they are characterized by a large tan, a hairy body that usually grows up to 6 inches long. Camel spiders are some of the most dangerous creatures that you are going to encounter in the Middle East. The bloodthirsty arachnids are very fast and they can run in the sand very quickly with their attacking capabilities, they are likely to cause harm immediately.

It is important that when you are traversing the country you are careful in the areas that you are visiting to avoid these spiders. They usually move up to 10 miles per hour on the sand and hence can attack you immediately. The spiders are known to use digestive fluids to liquefy the flesh of the victims. They may not be fatal, but they can cause tissue damage and organ failure if multiple spiders attack you. If the spiders attack you, you should seek immediate medical attention to prevent any severe case from happening to you.

These cobras are found across the country and you must avoid the areas that are known for them to inhabit. When you do this, you must know them. They are scaled and the most venomous snake that you can find in the region. The cobra snake has its hood-like characteristics on the neck when angry and you will hear a hissing sound before the victim is attacked immediately.

It is important that when you experience these snakes then you should seek immediate help because this is critical. The venom is known to cause loss of breath, organ failure, difficulty seeing, hallucinations, and eventually death. The Oxus cobra has very lethal venom that can kill several adult people in one spit. You must keep a proper distance when exploring different parts of the country.

In conclusion, Afghanistan is a unique country that you should try to explore in the future. You should take care of the dangerous animals, creatures, and the surroundings as well.