Glarus canton and all-region is the place I visited quite little but wanted to explore much more as it offers very beautiful mountain peaks and valleys. Hiking in Glarus is definitely an experience you want to try during your visit.

Glarus itself is quite a small city, with a population just a little higher than 12 000 people, but is definitely a very cozy place to visit. This time we didn’t spend much time in Glarus, just drove through as we were going to the village called Unter Stafel. But as much as I saw, Glarus is a very welcoming small mountain city.

If you ever happen to end up in Glarus, what I really suggest visiting is Klöntalersee which is a very nice Swiss Alps lake, quite big as well. It is just 5 kilometers from Glarus, so just 5 minutes detour. I don’t have even to mention that there are dozens of beautiful hikes around this lake.

You can go to Klöntal (an absolutely amazing view of the lake from that settlement) – go to the right on the road and drive up to the paths which lead to Mutteristock peak. I must mention that Klöntal has a perfect camping site called Vorauen where you can spend a night in your tent after some hiking activities. It’s a perfect Swiss Alps destination.

Ok, now, after this detour, let’s continue our trip to Unter Stafel.

The road from Glarus to Unter Stafel is very lovely and offers delightful views of the mountains. The distance between those destinations is just 25km so in 20 minutes we reached our destination.

How to Get to Glarus

Let’s put Unter Stafel a bit further and let’s talk about how to get to Glarus. If you have a car, it’s pretty straightforward: put it on your GPS and enjoy the drive. Glarus is not that far from Zürich: just 70 km, from Basel it would be 158 kilometers and from Geneva, it is 348 kilometers. So if you would like to visit Glarus while you are traveling in Switzerland: take a flight to Zürich.

Glarus is very easily reachable by train, you can get tickets even straight in the Zürich airport. Always check the latest prices and timetables right here: Swiss trains connections. You should reach Glarus just in one hour from Zürich.

Now, if you would like to reach Unter Stafel, there’s a bit more hustle. You must take a bus for the last part of your journey and then walk 2.5 kilometers to reach the starting point of your hike.

The bus stop closes to Unter Stafel is Elm, Steinibach. If you travel from Zürich, you may not even go to Glarus, you most likely will go to Schwanden. And then change to a bus to Elm. If I were you, I would ask for all the latest information once again in Schwanden in the train station, as I don’t want to put the BUS number here, it is possible it will change. Better to ask than wonder later on in unknown mountain destinations.

Once you get to ELM bus stop, go forward on the road (or path next to it) until you reach Panixerstübli.

It is a small restaurant where I started my hike up the mountains.

At first, I thought that Unter Stafel is a very small farmers city in the middle of a big valley, but it seems that no people are actually living there. There are many many cows in the fields, hundreds. This village has a restaurant and it seems that quite a big military base. While hiking we heard a lot of shots fired and quite many bunker doors in the middle of mountain meadows. As well we saw quite a few used bullets and some other military stuff. So that’s definitely an interesting place itself. 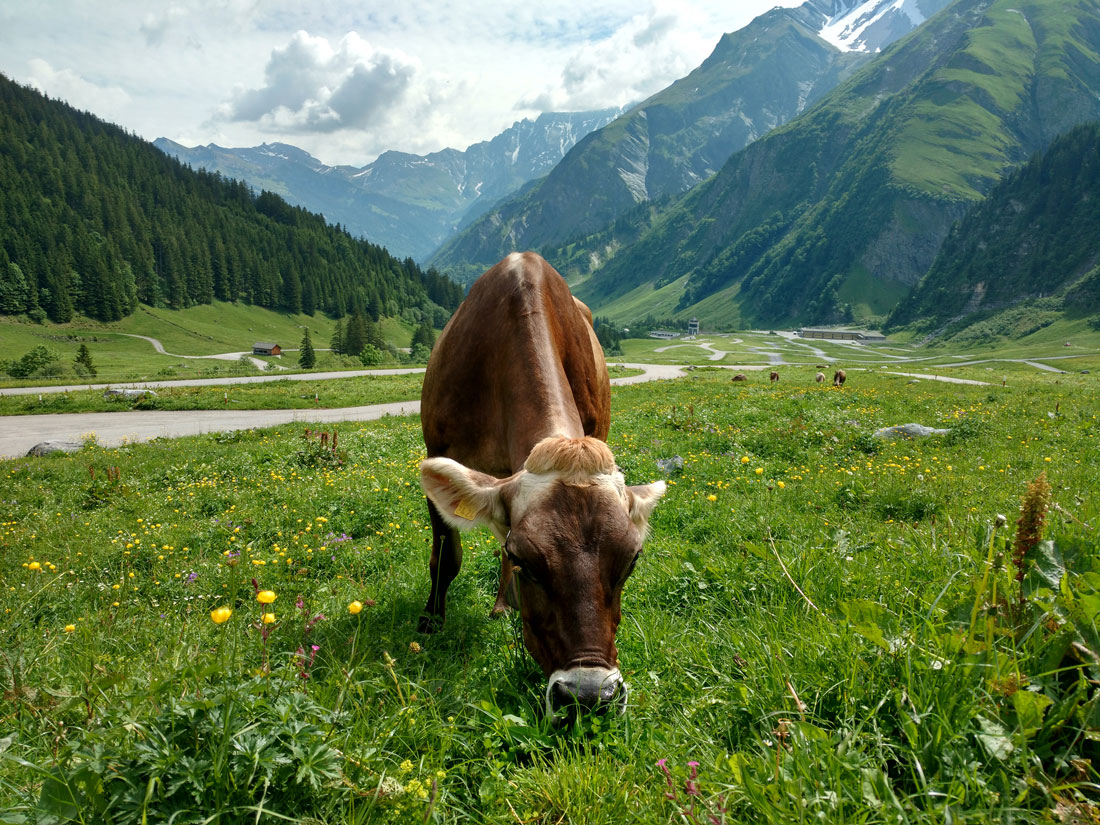 At first, our goal was to reach Panixer Pass. It’s a very interesting destination as in the 18th-century general Suvorov from Russia crossed it with all his army. It must have been a very difficult task to complete. As far as I know, general Suvorov lost quite a big number of people while crossing the Alps. 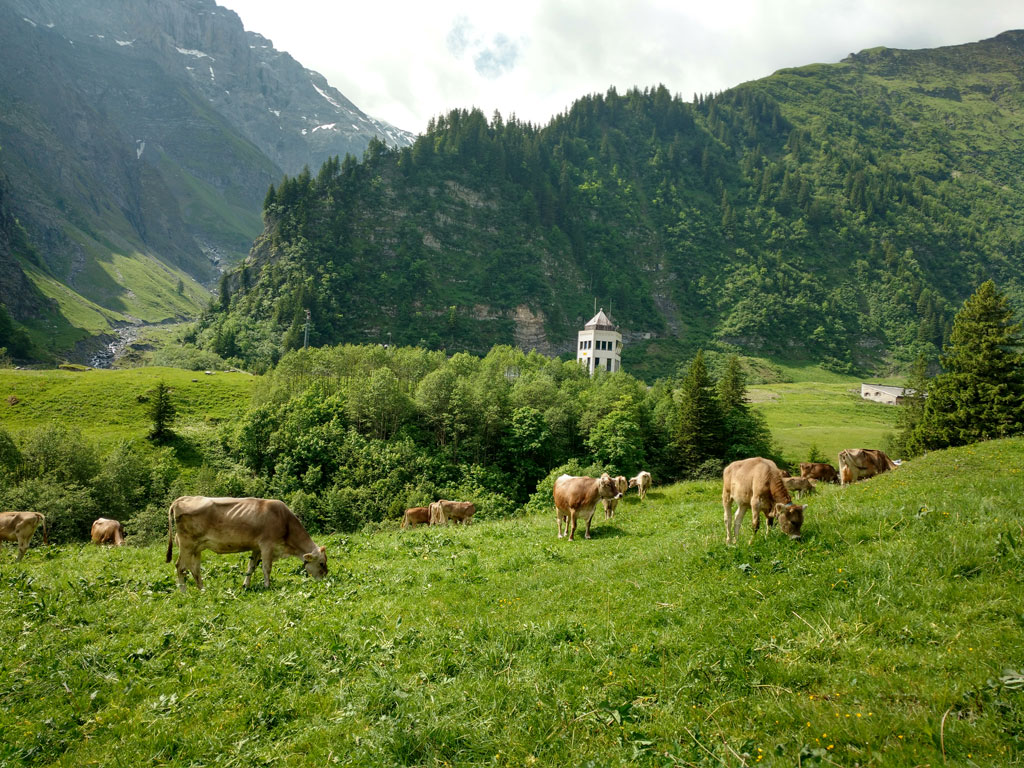 So, Panixer Pass. The problem was that the first sign to Panixer Pass showed us to go through one bridge in Unter Stafel, but it was closed, so we just chose another way and hoped to get back on the trail immediately. 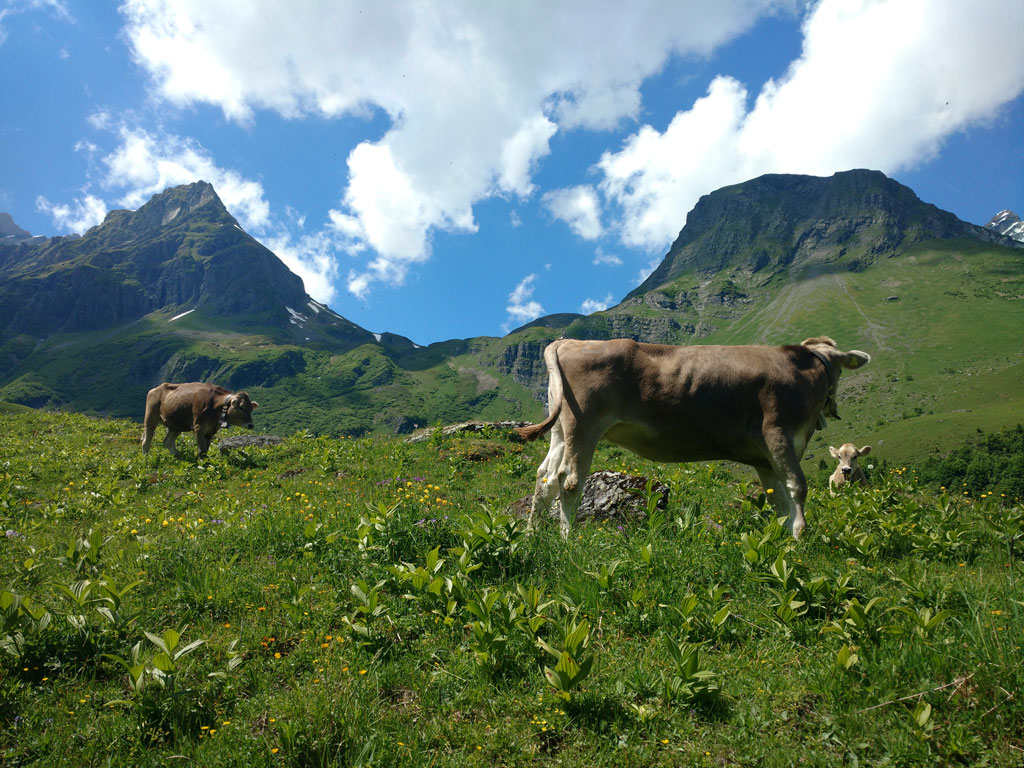 We started to get higher and higher but found no signs. We saw that higher in the mountains there’s a possible pass and the small trail was seen from below and thought that maybe that was our way up.

But as we got higher and higher, found zero signs, we came to the conclusion that this is not the path to our mountain pass. The trail looked quite abandoned and we had to cross the river with no bridge at all this is quite unusual in the trails in Switzerland.

Still, the views, the trail, the surroundings were so beautiful that we decided just to continue our hike up and see what we get there. 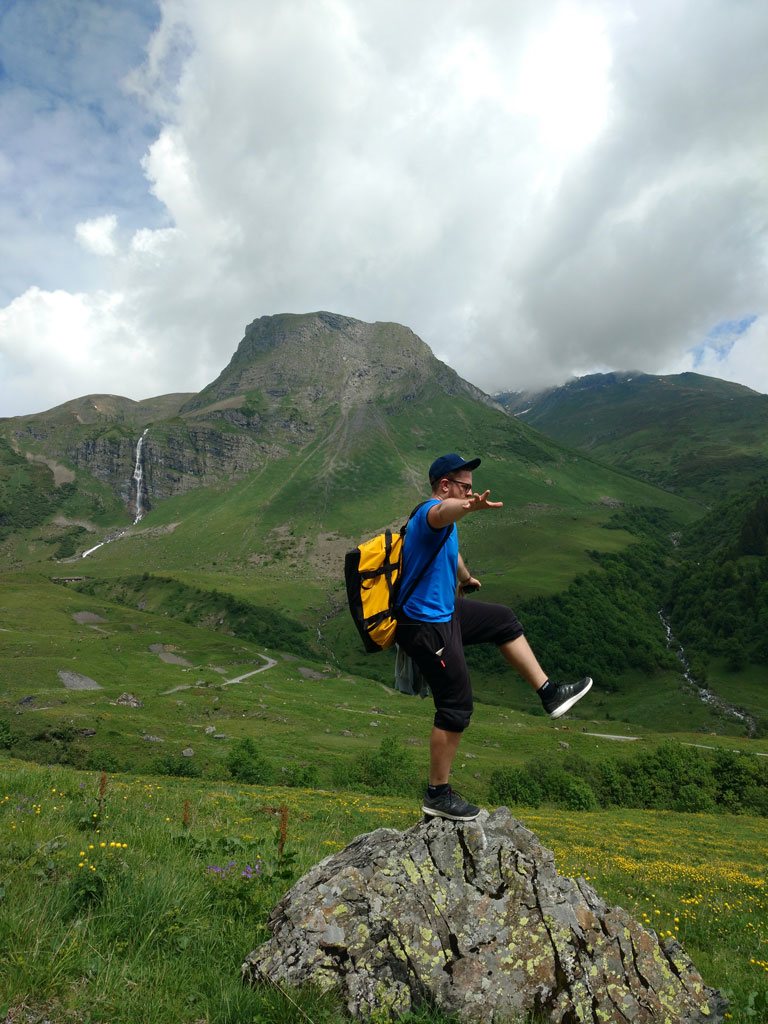 As we got to the top and as it always happens, there are more places to go up. 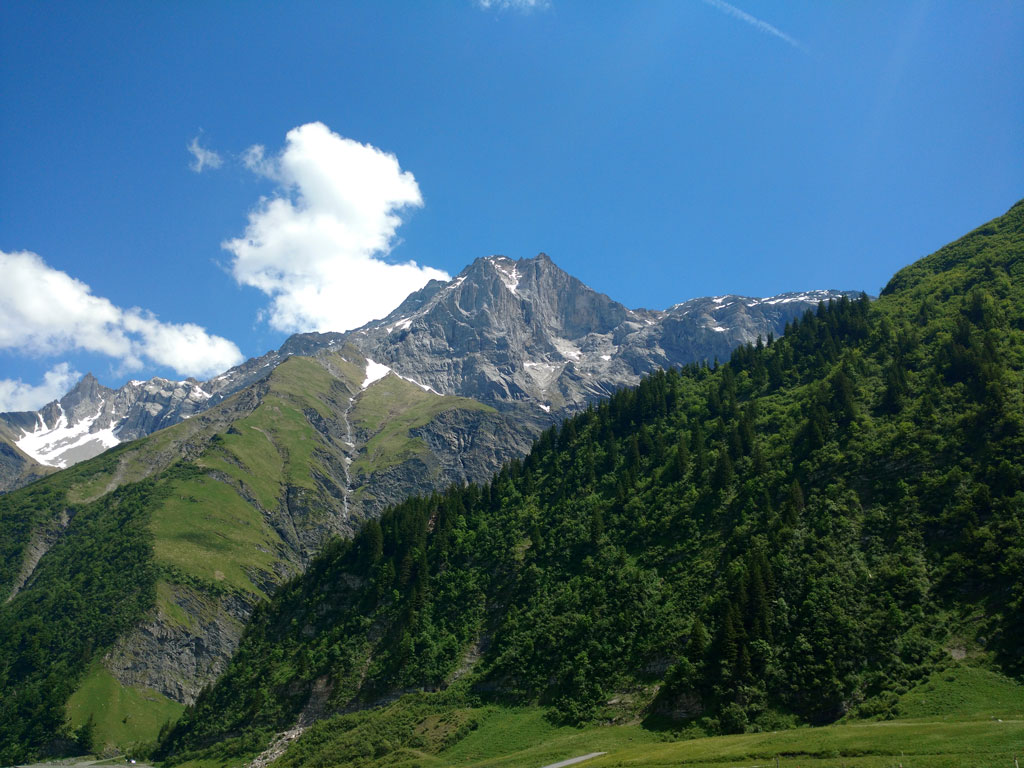 We crossed one bridge (it was actually a wooden plank) above a very fast Alps river and continued our trip further. In two hours we got ourselves to a pretty huge valley with many rivers, snow, and enormous peaks around us. The view was stunning. 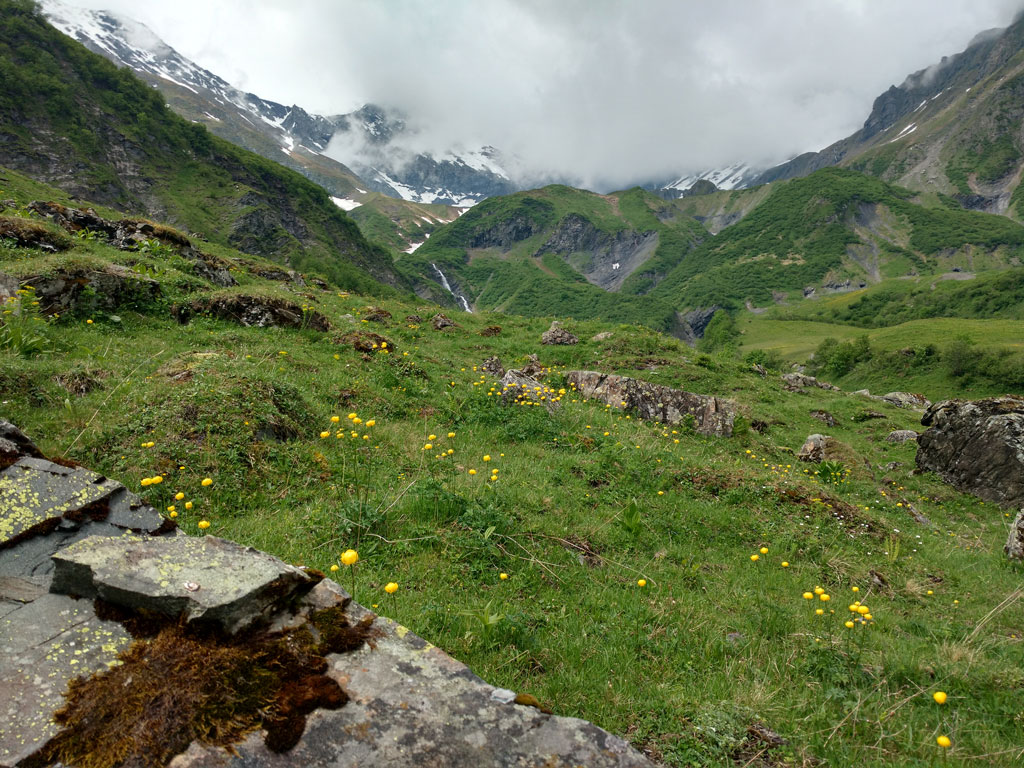 So we decided to have our small lunch there (4 bananas) and just relax near the river. We washed our legs, faces in the river and as well filled our bottles there. If saying the truth, that is the most delicious water in the world. 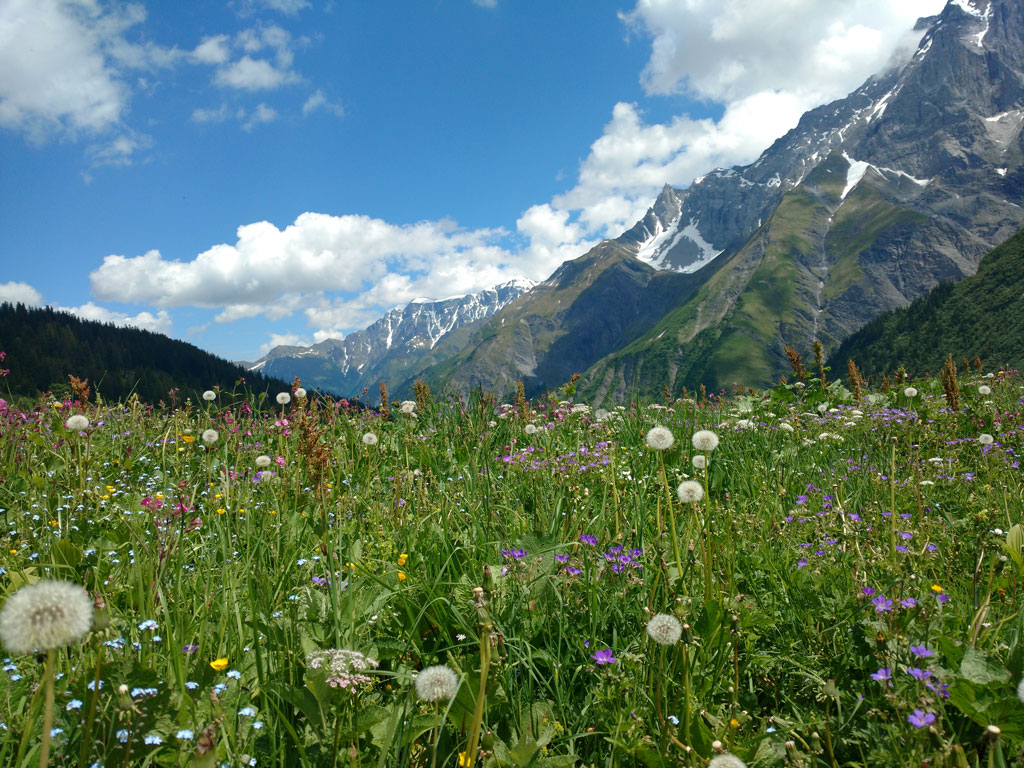 Near the valley as well we found one small house with solar panels, window shutters were open, but the house was closed… so I am not sure if anyone is living or spending time there. We saw no people. If you’re planning to do some hiking in Glarus, the best time would be in April (spring in general) as the place looks surreal. The flowers are blooming, everything is green, but in the distance, you can still see snowcapped peaks. 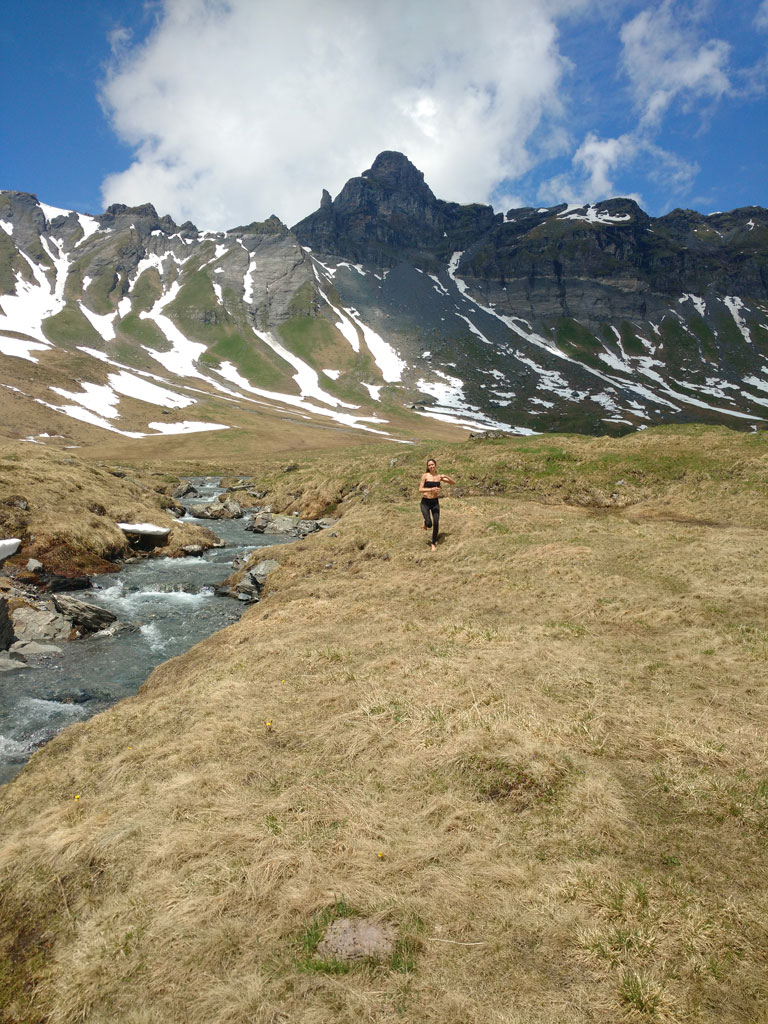 Oh, what was very cool, for the first time we saw Alps foxes a couple of times there. That is quite unusual. They are very fast, but still, a very cool thing to see. And we saw one beaver as well. 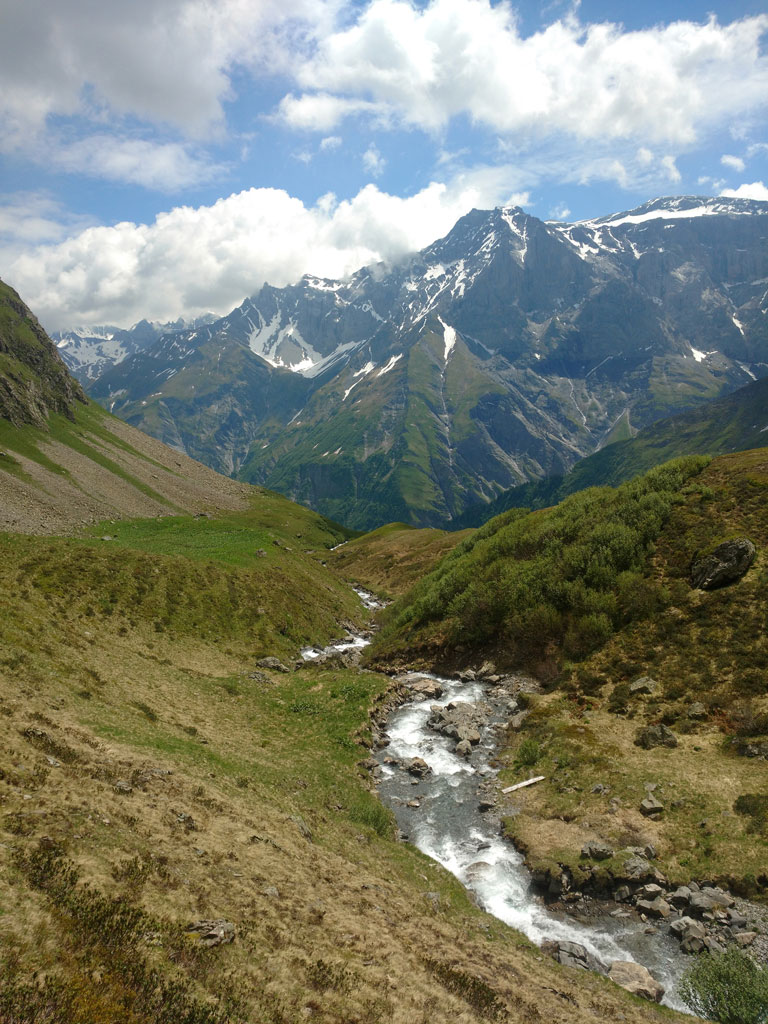 At the moment I am not sure if the valley we got ourselves to has a name as I do not find any on the internet. But if you ever get to Unter Stafel and you decide not to go to Panixer Pass, just keep hiking slightly to the right.. as well on the right you are going to see a big waterfall, so just pass it and go up and you will get to the valley we went.

And please enjoy my first ever GoPro video below.

Family-Friendly Day Trip to Davos, Switzerland
Is Swiss Travel Pass Worth It?