Lithuania is a European country that has a wide array of attractions. When planning for your vacation, this country should be on top of your list. The Lithuanian castles were used as defensive structures during the medieval period, and there is so much that you can learn while in the country. These castles were characterized by enhanced technologies such as moats, arrow slits, and murder-holes. However, with the advent of modern technology and the creation of new weapons, they became obsolete. They are now structures where you can learn the history of a country well. Most of the ancient castles that were made of wood did not survive the wars. However, the ones that are made of stones and bricks dating back from the 13th century are still there.

The castles in Lithuania have been on location for over 900 years now, and not all these castles were made in the same design. Despite the structural difference and the unique building styles, they were all fortified, which offered protection during wars. It is imperative to note that they were located strategically to places such as along the rivers or administrative capitals such as Vilnius. When you visit Lithuania, you should make time to visit as many castles as you can because this will help you understand the country more and embrace its diversity and rich culture.

Lithuania is an incredible country, you can enjoy your time by visiting the castles and other historical monuments such as the monasteries and churches spread across the country.

Top Castles That You Should Visit in Lithuania

Lithuania is home to some of the most exciting medieval castles, and you will learn so much about the country by visiting it. However, a trip to the charming country is not enough without a visit to these Lithuanian castles.

Kaunas castle is one of the most ancient European castles that is situated in Kaunas. Kaunas attracts many tourists because it is the second-largest city in the country. According to recent archeological evidence brought from this castle, Kaunas castle is an ancient castle that dates to the 14th century.

This castle was constructed in gothic style, and you should check out the fantastic structure and the paintings. The Kaunas Castle was built strategically on the banks of river Nemunas, and it is still intact up to date. The castle served as an outpost, and it was one of the best-protected areas for the trades and administration around the country. 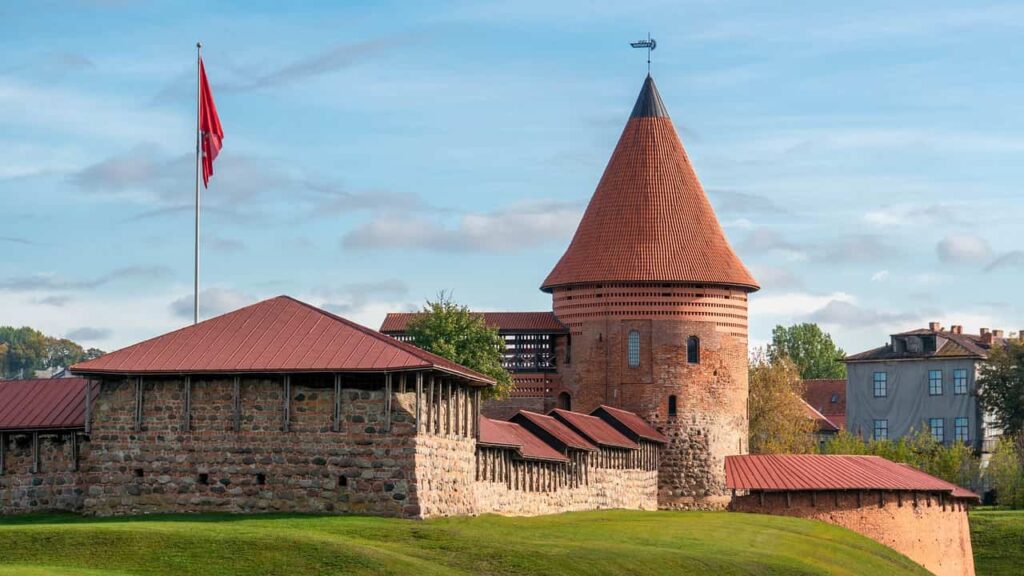 The Trakai Castle is the second most famous castle in Lithuania and is situated in the historic capital of Lithuania – Trakai. It is one of the most popular places in Lithuania to visit as it not only has a castle, a huge lake where many rowing and triathlon competitions take place but as well famous dish “Kibinai”, lovely walks next to the lake and many other interesting activities.

The Trakai castle is situated on an island on Lake Gavle Island in the greater Trakai region of Lithuania. The construction of this castle began in the early 14th century and was completed in 1410. Trakai castle is a fantastic structure that stands with high significance in the country because it was the primary location for the grand duchy of Lithuania.

Further reading: Funny Lithuanian stereotypes that are far from the truth

Since it was a large castle, it was constructed in phases. In the middle of the 14th century, it was completed, and the primary purpose was to strengthen and expand the Trakai castle while providing proper defense. 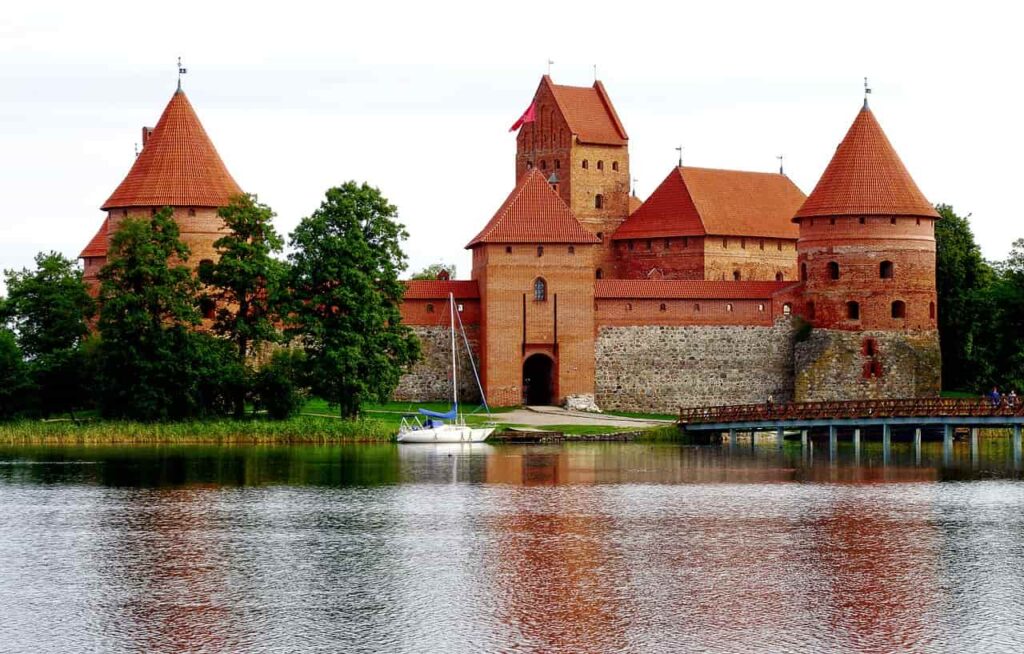 If you would like to really impress Lithuanians, you could quote a very famous poem written by the most famous writer in Lithuania: Maironis.  Everyone learns this poem at school, I will quote the most popular part below:

Trakų pilis means Castle of Trakai in the Lithuanian language.

The Raudondvaris castle is situated in the significant Raudondvaris town in Lithuania. It is rich in culture and diversity as it depicts the phases that the country has undergone over time. This castle was built in a gothic-renaissance style. The court was mentioned by the Teutonic chronicles that document that this castle’s construction began in 1392. However, during the Grunwald war, it was enlarged further and reinforced with fortresses that made it unique and countered the Lithuanian territory’s fighters.

Raudondvaris castle was first constructed as a small Konigsberg castle before it was moved to the current location, where it housed 80 knights and four hundred soldiers. Since the 13th century, the castle was used as a home to the kings of Poland and grand dukes of Lithuania until the year 1550 when it was given to Sigismund II Augustus to his wife Barbara. The castle was sold to the Radziwill family after the death of the ruler. There is extensive art that belongs to the family, and these creations include significant artists such as Leonardo da Vinci and Caravaggio. There is so much that you can learn when you visit this castle.

This is one of the ancient castles situated not far from the Lithuanian capital, and it was constructed during medieval times just at the beginning of the 14th century. The Medininkai castle is built in a 6.5-hectare land, and the defensive structure was used as a protection unit for the royals who lived in the castle. A rectangular yard is about two hectares around the castle, and it is a perfect place where you can relax and unwind as you learn more about Lithuania.

The castle features four gates and four towers, and the central tower is over 30 meters high. The central tower is used as the primary investigation and watchtower where the security officials would communicate all the information about the surrounding environment. Unfortunately, in the 15th century, a significant fire affected the castle. However, there was a restoration process where all parts were restored. Therefore, when you visit this impressive castle, you are sure that you will enjoy your trip because you will learn so much about the country.

Norviliškės castle was previously a monastery before it was made into a castle during the renaissance period. This castle was first mentioned in the year 1586. It was a major part of the Lithuanian traditions. The first part of the castle was constructed in the mid-1500s before it was completed by the Franciscans in 1745 as an entire monastery. During the Second World War, the Russian federation changed the monastery. It used it as an accommodation to its soldiers, and this provided an upper hand over their enemies before they were at a higher ground.

Norviliškės castle remained a manor for a very long time, and there were major reconstruction activities in 2005 to uplift the castle’s status. This made the castle more appealing, and it has become one of the top tourist destinations in Lithuania.

This castle is located in the Biržai region of Lithuania. The castle was constructed at the beginning of the 15th century, and it was first built in bastion style. There is an artificial lake that was constructed to aid in the construction works of the castle. The lake is about 40 square kilometers, and it is a perfect destination that you can go to and enjoy your trip while you are in Lithuania.

Further reading: Souvenirs from Lithuania you should get

During the war with Sweden, the castle acted as the main fortress for the rulers who lived in it, and the war resulted in significant destruction of the castle. However, a high-energy renovation was done in the late 80s, and the ruins were restored to their original renaissance- baroque style. In addition, there is a museum in the castle that acts as a place where you can gather more information about the country and all the features that make it a tourist destination.

The Panemunė castle is situated on the right riverbank of river Nemunas, and it is in the Vytenai district. The construction works for this fantastic castle began in 1343, and there have been significant changes since the castle was first constructed. You are sure that you will learn so much about the country when you visit this location. The castle gained the name Panemunė because of the former residents living in the castle when it was still a manor.

Further reading: Awesome things to do in Lithuania

In the original plan, the castle was constructed to be a nobleman castle, and it was not built for strength or fortress purposes. However, with the modernization and more wars in Lithuania, major structural changes were done to include defense fittings. As a result, it is one of the most serene buildings you will find in Lithuania because you can relax and learn more about Lithuania. The interior of the caste is made of frescoes, and the castle is still under renovation and upgrades. However, you can visit it and learn more about the country and the history of this fantastic castle.

The Siesikai castle is situated in the Ukmerge district, and it was constructed closer to Siesikai Lake in the 16th century. It has since undergone tremendous changes that have made it a top-notch destination that you must visit. Like many castles in Lithuania, the construction style for this castle is a renaissance and the owners gave it this name.

Gediminas’ Tower is the most iconic castle in Lithuania as it is right in the middle of Vilnius, it is seen from the old town and financial district. Everyone can visit this castle once they visit Vilnius as you not only get to see the castle itself but the most epic views of the red roofs of Vilnius.

The legend says that our duke Gediminas had a dream of a wolf who told him to build this castle and move the capital to Vilnius. The capital was Trakai before.

The Gediminas tower is not actually a castle (it is what is left of full castle construction and there are ideas flying around to reconstruct the whole structure), but it was constructed similarly, giving it a rank among the top castles you should visit in Lithuania. The tower was first fortified with wood before major construction was done to upgrade the look of the tower. The brick castle was constructed at the beginning of the 13th century and was completed in 1410.

The tower has a major significance to the people of Lithuania because of its history. It is posted in the national currency, and different literature books capture the construction of this amazing castle.

If you have limited time in Lithuania, the top 2 castles to visit would be Trakai’s castle and Gediminas Tower. These are the most famous and iconic architectural marvels of Lithuania. It is very good that these two are very close to each other as Trakai is only 30 kilometers away from Vilnius: How to get to Trakai.

Once you stroll around in the historical Vilnius old town, spend additional 20 minutes and walk up to Gediminas tower, you won’t regret the views. Trakai city not only has the castle but is worth the full day trip from Vilnius.

In conclusion, you should not be limited to just the mentioned castles and towers when visiting Lithuania. You can be adventurous and explore the country and search for more castles that are not captured here.