Iceland is one of the most visited tourist destinations, and it has gained massive popularity in the recent past. However, many people tend to confuse Iceland with Greenland, which is its neighbor. Iceland vs Greenland – which one to visit? In case you’re wondering about the differences between those two places, then you’re in the right spot!

Greenland has not been featured in many online journals or articles; hence many people do not know much about it. It is a truly hidden gem that we need to explore and understand why the situation is currently. In this article, we will explore all the features that make Greenland unique and why so many people love going to Iceland. Iceland is an exceptional location that is revered by people visiting to see the incredible glaciers, thermal springs, dramatic fjords, volcanoes, waterfalls, and a wide array of outdoor hiking activities.

Iceland is a destination that calls for thrill seekers to check out the best that has ever been in the world because of its exceptional nature and well-connected locations. When you are in the capital, there are many activities that you can do as it is one of the most vibrant cities in the world with a wicked nightlife, easy-going people, and exceptional dining experience. You can visit this destination anytime because you can access it as it has an international airport that receives air traffic from major cities in the world. Iceland is simply an excellent destination that you should visit.

On the other hand, Greenland is Iceland’s neighbor on the left, and many people do not know much about this remarkable country. You will feel that the names Iceland and Greenland were mismatched. However, that is what makes the two countries unique. This is a magical icy wonderland that you have never seen before. It is one of the most unexplored locations on this planet. The inhabitants of this country are around fifty thousand people.

This is a significant difference as the population in Iceland is about three hundred and fifty thousand people. It is imperative to understand that Greenland is an island managed by Denmark, and there are numerous picturesque villages that you can explore on your next visit. The coastline is dotted with unique communities that make it a special place. There are numerous glaciers, fjords, and snowy landscapes that are awesome to look at. Greenland lacks a proper road infrastructure. Thereby traveling is usually done on a boat or a helicopter. You will find traditional people that have maintained their lifestyle.

Let’s dip into details that differentiate Iceland from Greenland.

Greenland is 80% icy, and it is covered by an exceptional ice layer throughout the year. It is a destination that has the most extensive ice body after Antarctica. In the northern region of Greenland, there are desserts, while the southern part has greener pastures. Iceland has a massive chunk of ice too. However, it is only a part of the country that is covered by ice. However, there is a milder climate in Iceland compared to Greenland as it has a flourishing summertime. 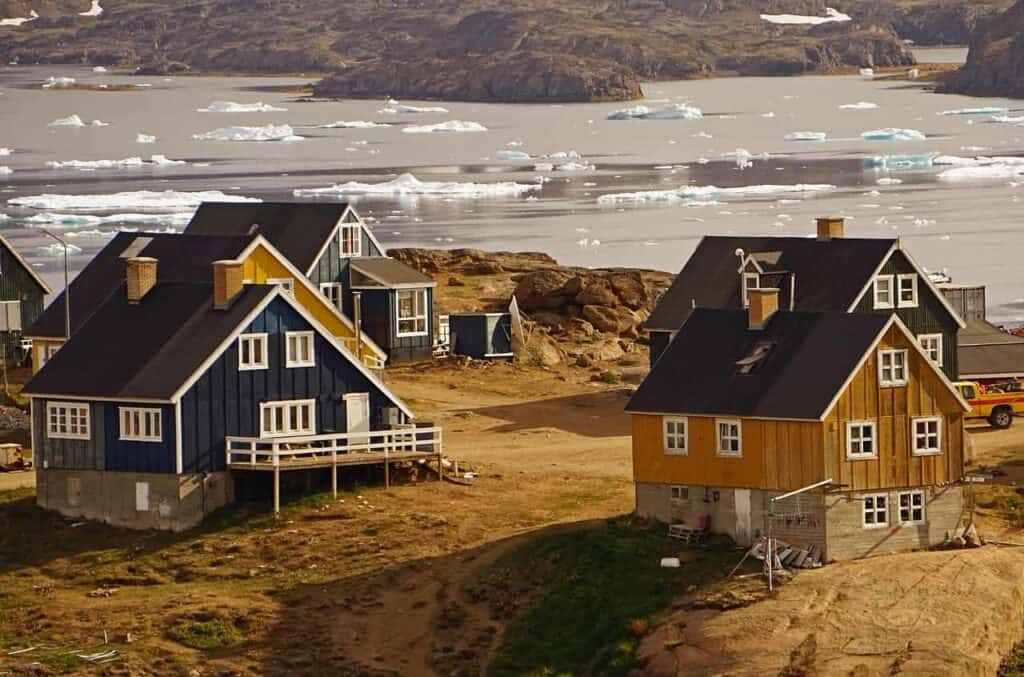 The climatic conditions of both countries differ significantly. The climate of Greenland is predominantly colder, while that of Iceland varies from one season to another. The summertime period brings a new dimension.

Greenland has an arctic summer that is milder, and it has the midnight sun as well. However, the summer should not lie to you that it is going to be hot. You must have your warm clothes because temperatures do not rise by a considerable margin.

Both Greenland and Iceland are inhabited countries. However, Greenland is sparsely populated when compared to Iceland. Greenland has a population of about 50,000, while Iceland has residents about 350,000. It is important to note that Greenland is 21 times bigger than Iceland, but most of the land is covered by ice, hence why it is less inhabited.

One of the most common features is that Iceland has received many tourists in the recent past. There has been a lot of advertising and promotion of Icelandic tourism, and therefore the country has had so many tourists visit it. According to data from the tourism ministry in Iceland, the country welcomes over two million tourists annually.

On the other hand, Greenland has a long way to go in terms of tourism. It has a wide array of incredible destinations that you can visit and wonderful nature that you can marvel at. It only welcomes sixty thousand tourists annually. Iceland has a better infrastructure and hotels, hence why many people visit the country on an annual basis. The arctic wilderness in Greenland and beautiful volcanoes and fjords are some of the best things that you can see in the country. 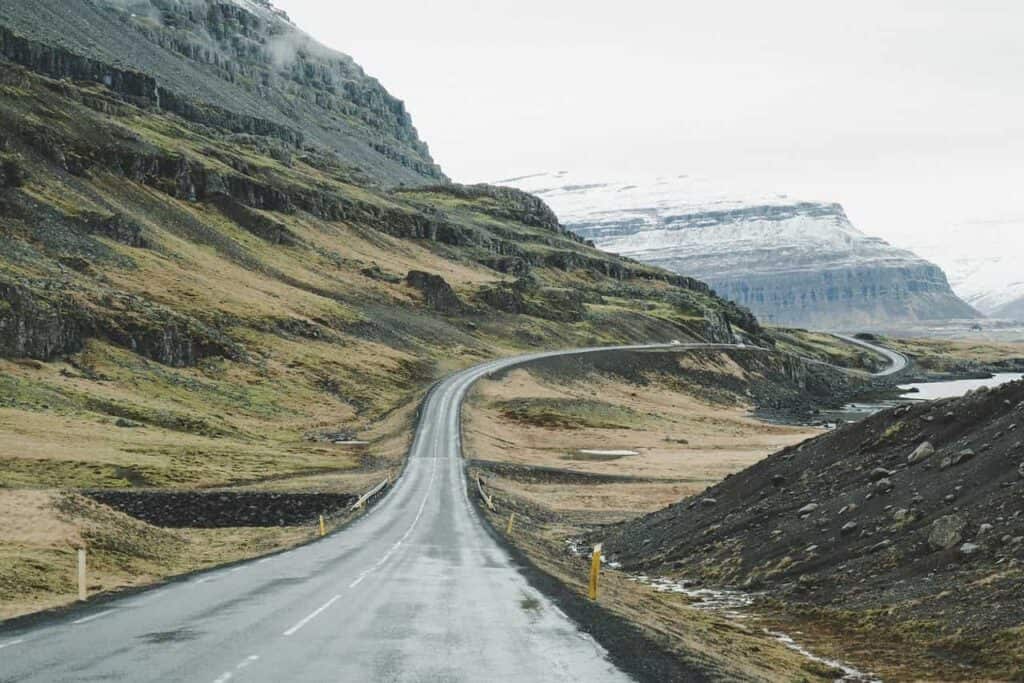 Iceland and Greenland have very diverse languages, history, and culture when it comes to culture and traditions. Most Icelandic people are the descendants of the Norse men or Vikings. However, a majority of the people in Greenland are people who originated from the Inuit people.

There are three groups of Innuit people who inhabit Greenland, and they all have different languages, cultures, and traditions. The official language in Greenland is Kalaallisut, while that in Iceland is Icelandic. However, it is essential to note that most Icelandic people speak English, while those in Greenland speak Danish. Christianity is the main religion in Iceland and Greenland, but Iceland is a much more secular country, and the church-going population is now tiny.

Further reading: How is Christmas celebrated in Iceland?

Both Iceland and Greenland are home to gorgeous wildlife and outstanding natural beauty. The skies are usually filled with arctic birds, and the waters are bursting out of life with sharks, seals, and whales. The two countries have big national parks, amazing scenery, and vast ice caps. Iceland sits on the edge of two tectonic plates hence a huge number of volcanoes.

The volcanoes have played a major role in shaping the landscape of this awesome country. However, Greenland does not have volcanoes, but it has the largest national park in the world. Since Greenland is free from cars and nature interfering activities, the pristine wilderness and polar bears make it a perfect destination. 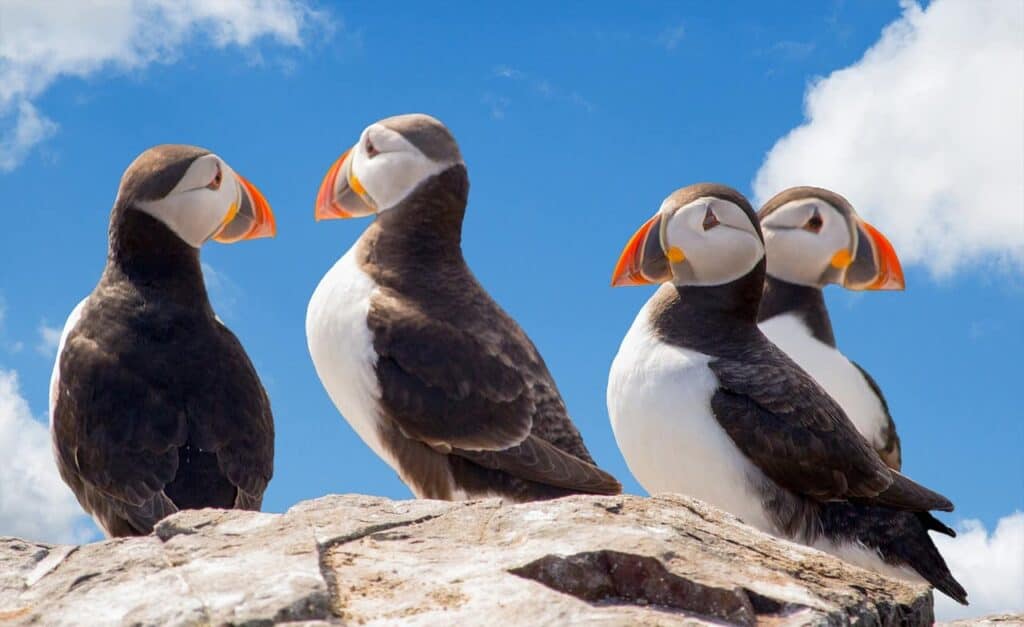 Since both countries are closer to the arctic circle, the countries usually experience long hours of darkness during the winter. During the summer period, the sun does not set on some days of the year. If you are looking for a destination where you will experience the midnight sun, Iceland and Greenland are the two perfect destinations.

Since Iceland and Greenland are located closer to the arctic circle, both countries have cuisines that majorly features seafood. It is not easy to grow crops in both countries, and the ancient people usually relied on fishing and hunting for their food. It is important to note that there is farming in both locations and especially in Iceland.

Greenland has some farms too, and the people have a diversity of crops to eat. Climatic changes forced Greenland farmers, while volcanic eruptions have affected farming in Iceland.

Fun fact: Did you know that Iceland features loads of local breweries and their craft beer scene is among the strongest in Europe?

It is important to note that the sovereignty of the two nations is totally different. Many people tend to think that Iceland is part of Greenland. However, it is essential to note that both countries were part of the Danish kingdom.

Iceland gained its independence in 1944, but Greenland is still under Danish rule. Although Greenland governs itself, they still report to the Danish government. However, this may change in the future.

In the comfort of your bedroom, you can see the northern lights while in Greenland because there are low pollution levels. However, if you want to glimpse what it feels like, you can take a tour and see the sky shines. 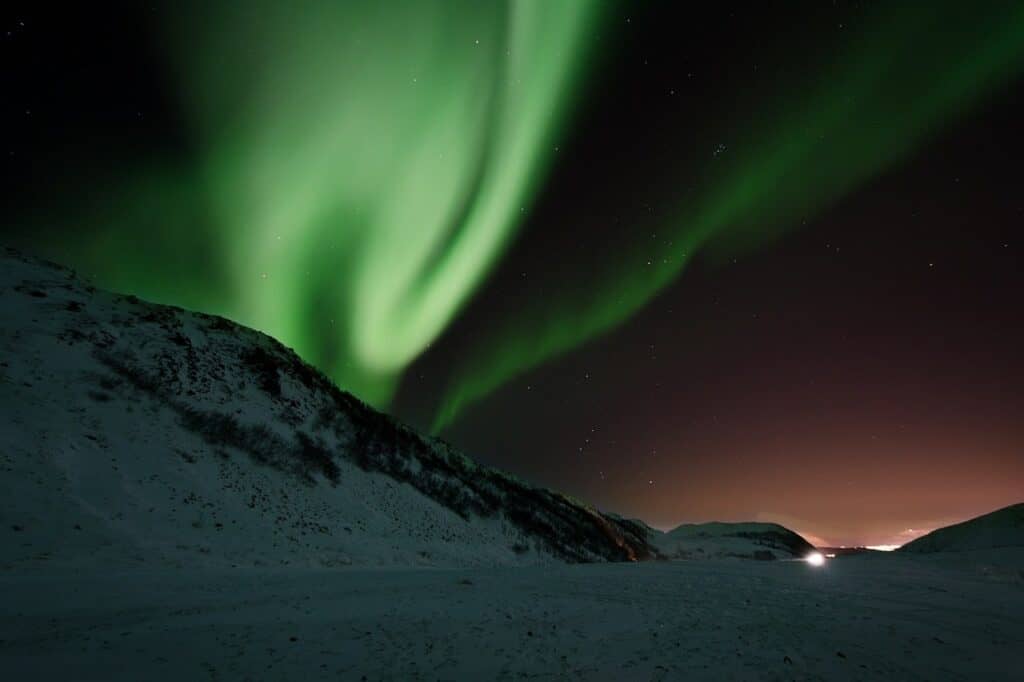 One feature that differentiates Iceland and Greenland is their ancestors. The Vikings or the Norsemen are the ancestors of the Greenland people while those in Iceland originated from the Scandinavian countries.

The Norsemen settled in Greenland at about 1000 AD, and they vanished 500 years later. That is one mystery that makes Greenland a perfect destination to explore the history of these ancient people.

In conclusion, Iceland and Greenland share many things in common. However, they are also unique differences that both countries have, and you should try and explore them individually.

Ultimate Guide on Iceland in April
11 Authentic Things to Do in Akureyri, Iceland